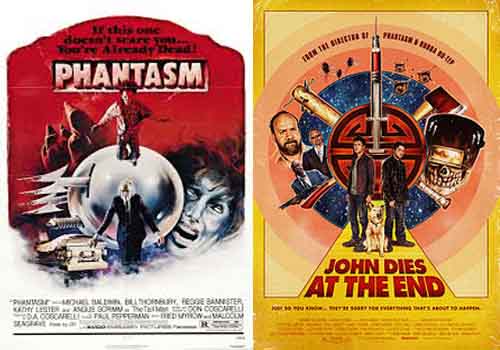 Episode 92 – Phantasm & John Dies at the End
ReMake Me

Justin is sick an nasally, Russ recalls his SATs and being sick during the test, Russ’s youngest got his tonsils out and apparently that is going to be a thing, Russ had the talk with his son, a boy named Jody, Marianne’s theory about 70’s movies is totally confirmed by Phantasm, Phantasm is basically the Bible, weird lady/Tall Man is maybe a weird snake lady?, are dinosaurs reptiles?, Justin’s Phantasm notes, tucking it in to tight jeans, more casual breaking and entering, What if Angus is no longer a Tall Man?, Semitic moments, adventures in escape rooms, did the escape room break the rules? you be the judge, or don’t, Theseus’s hatchet, Russ’s hatred of fantasy is completely vindicated, Justin on cold medicine is just Russ but nicer, Russ takes it to a weird bad place again, Six Ways to Sunday, we don’t live in a fun world anymore, the sad end of Under Arrest, Scatman Cruthers as Bing Bong Johansson, this door can not be opened, DoA physics