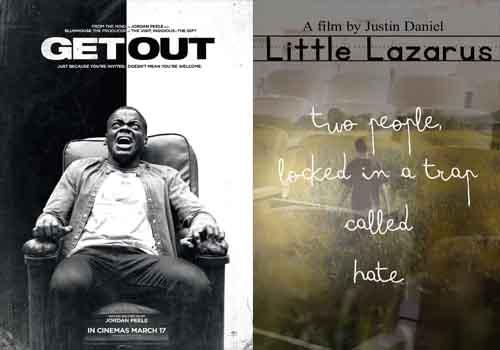 Episode 100 – Get Out & Little Lazarus
ReMake Me

It’s episode 100!!!!!, hot DJ MC Fiverr callback (the first of many episode 100 callbacks),  we recorded this a while ago, Justin bought stretchy jeans, Russ has a new game, it turns out that Get Out is about race — who knew?, a new voice on the podcast! Welcome, Jason!, Timecrimes > Primer, Tom doesn’t know who people are, Russ has an issue with Get Out that it turns out is the point of movie, more 100th episode callbacks, dead uncles, okay — this is the point in the podcast where everyone just completely dumps on Justin for making a movie in high school — it goes on for a while, best DVD box pull quote ever, Josh has Little Lazarus head canon, 33, Ben holds nothing back, Justin’s mom writes a poem, Russ goes over the rest of Justin’s YouTube page, Justin and Tom finish the segment by getting really real, everyone makes their pitch for ReMake Me: The Movie, Justin puts himself and Russ in Ghostbusters 2: Double Trouble, Saxophone Ryan just starts reciting the plot to Corky Romano, Tom Kerosec puts Justin in the mermaid costume again, MP Josh basically makes something up poorly on the spot, Ben reads the back of the ReMake Me: The Movie DVD, Russ goes all out and whips out a script for an impromptu table read, Russ can really write Ben perfectly, thank you to all the listeners and the people who read these stupid notes for 100 great episodes! Here’s to 100 more! (that was cheesy, wasn’t it? I can never stick the landings)

Next week: RWD & Razors: The Return of Jack the Ripper