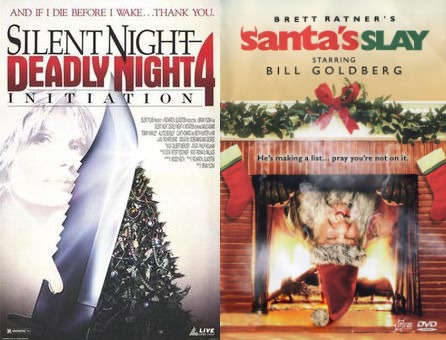 Justin’s girlfriend’s dad’s heart got shocked back to working right (that’s a lot of possessive apostrophes), Munchhausen by proxy, a history of the instruments that Russ and Justin played in high school, Silent Night Deadly Night 4: Initiation is a total cluster and is totally not about an axe-wielding Santa Claus,  the best Weekend Update joke of all time, the combo of being Clint Howard and covered in blood, people suck — especially creepy guys, a soon-to-be ReMake Me Classic, boys will be boys, the three best date rape jokes, pizza math, shape-shifting spaghetti, charming old-man racism, the finer points of tuna casserole, Russ looks at some very specific reviews, Russ makes Justin say it again, Stretch Armstrong hands, is there a dog SAG?, Justin’s best friend has a cell phone number based on his favorite WCW wrestlers, yes Virginia there is a Santa Claus (kicks the dog), Justin tells an uninteresting story with unearned exuberance, Russ get’s real about Cracker Barrel, in all sin-seriousness, you bought me a gun rack?, Russ’s first movie prediction, Tiny Lister is good at his job, the time Justin ate food out of the garbage, Russ’s kid doesn’t like egg (this is important), the story of how Justin is an idiot, the difference between making a racial joke and making a racist joke, Santa wasn’t fat, Goldberg’s wrestling entrance, the door to the rink, teleporting hunters