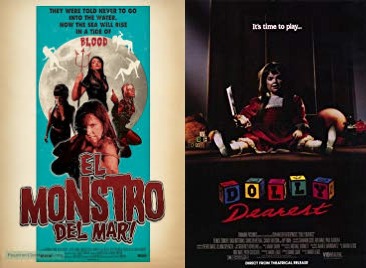 Justin took one for the team but it didn’t matter, Justin is not at the gym, Into The Spider-Verse is pure joy, why aren’t there animated horror films?, Russ schools Justin on Him, analog vs. digital, the technology of old games, Monstro! sucks, turning to the news on the radio, Russ learns what not to Google, the least sexy hot women ever, the horror movie manifesto, Russ writes himself an Internet note, horror movies love 17 year old girls, turns out peer pressure works, the old man and the sea, Russ and Justin share their favorite lines from the “film”, for future reference it was Orko, the Critic was a fantastic show, we don’t want to talk about Monstro!, weird interviews, Artie Lang is sad now, stories from Warwick Davis’s autobiography, Justin maybe convinces Russ to read A Game of Thrones?, Russ says the thing about George R. R. Martin that everyone says about GRRM, is Dolly Dearest better than Child’s Play? maybe, Russ’s latest idea to get rich, Hecho en Mexico, Small Wonder was a weird show, https://www.youtube.com/watch?v=1h8hPA7ga9E , also the AIDS boy was on Mr. Belvedere not Small Wonder, Batman logo chest hair

Next week: Insidious & The Conjuring