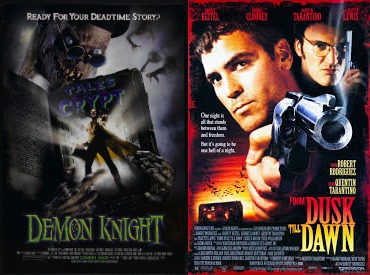 Episode 109 – Demon Knight & From Dusk Til Dawn
ReMake Me

Studio is a generous term for Russ’s basement, Justin kinda started a company, sams dot club does not redirect to samsclub dot com, Uncle Willy is not Uncle Billy, Russ can not figure out what words are, come after us Bloodhound Gang!, the Cryptkeeper should not get up and walk around, the iconic Tales from the Crypt opening, it is what it is, the physics of escaping a demonic car crash, Russ talks smack about a random person from high school, Russ’s elaborate Demon Knight tattoo idea, everything is a real sex thing, Billy Zane’s demon tantrum, Justin is relieved he didn’t watch Russ’s video, what did demons do in the before time?, random 80s cartoon knowledge, ruminations on The League, there’s a lot of spitting, grenade dicky, Russ has committed to read A Game of Thrones, a 40 minute documentary about hating Dennis Miller, From Dusk til Dawn is great – go watch it, a literal firefight, Justin was on 4chan and got what he deserved, Maniac Cop is not a human, Russ doesn’t know Emma Thompson and I should really not be surprised at this point, Russ likes his bars with fire, Kate Winslet isn’t in  Wimbledon, shotgun cross is awesome