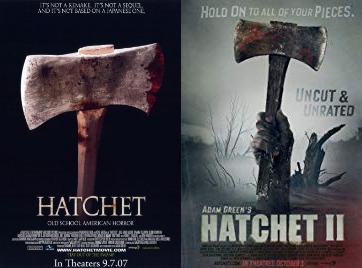 Yo!, John Cena put out an actual rap album that was actually okay, Russ “accidentally” bought a Chinese knockoff board game, Fiasco is a fun role playing game that doesn’t need a game master, Russ has a “fiasco” story that seems to fit the word correctly, Justin doesn’t like Hatchet but he respects it, Russ loves Hatchet, Adam Green loves throwing fake blood at trees, Joel David Moore is the cool DJ Squalls, Hatchet was financed with a fake trailer, Asian Adam Sandler, ADR jokes, ripped open like a fruit you rip in half, kill all the character actors first, Victor Crowley as a kid should have been put down, axing down a door with a hatchet, Russ discovers the Jose Conseco video, Russ nails the tag line, the two times a bird pooped on Russ and the one time a bird pooped on Justin’s grandma, the main character gets about a foot shorter in the second movie, all the cameos, the biscuit song, this is the movie where nothing happens, Russ’s nemesis