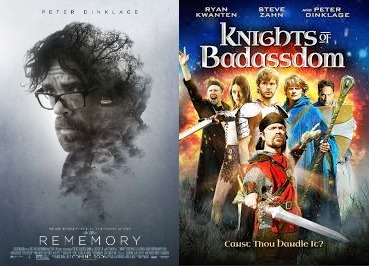 Russ can’t think of a 90’s reference to start the show so he punts, Justin is all board gamed up in the head, Russ’s offspring are both making games, friend of the show Loud Jason is at the World Series of Poker right now, speaking up at work only leads to more work, how to talk to your boss without talking to your boss, Russ is starting to feel old, this is the reminder to Russ about the death game he talked about, Justin still looks young but also fat, Justin’s 30th birthday realization, there are people out there who have no idea what a dial tone is, what color is the past?, Knights of Badassdom hates its audience, not laughing at jokes but at the actors delivering them, KoB is one of those studio botches, Role Models is a much better LARPing comedy, the movie doesn’t care about the movie, the digital effects suck but the monster is alright, Brian Posehn loves metal, the story of Nightbreed, decisions by committee always suck, why Marvel is successful, all the Adam Green references, new Pride Babadook, New Coke is coming back, past Justin was kinda sweet, Russ’s guide to a good marriage, Rememory suffers from not revealing enough information so that it can reveal it all at once, Russ watched the end of the movie in the car like a terrible person, these are both movies where it doesn’t matter that Peter Dinklage is a little person, Russ missed all the revelations, RIP Anton Yelchin, the Butt Fumble, Borders stories, Russ is wary of downloads