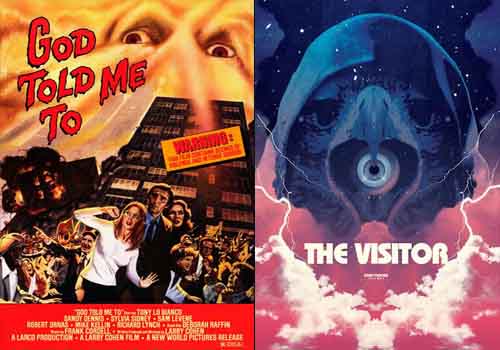 Episode 53 – God Told Me To & The Visitor
ReMake Me

It’s been one year! This is definitely the best (or worst) episode of the podcast ever! Ryan starts off this mega-episode with a story, Justin was told this would be the 50th episode, we outlived most other podcasts, all your favorite guests are here, Josh from HorrorHound, Cohen Over Coen’s own Tom Kerosec, Ben who is Ben, and Saxophone Ryan! Russ doesn’t try a Jigsaw impression but wants to play a game anyway to determine the movie we watch, Russ forgets how to math and then forgets how to count, Ryan discovers a gardening book, the only question that matters, everybody leaves, Justin can’t cheat, Rawdog Rex, we already watched Maniac Cop…oops, Ben drops some last names, Justin once almost threw a kid off a set of bleachers, he ate the peanut, the gift that keeps on giving, we eventually kind of talk about the movies kind of, our first giveaway, Tom digs himself a hole, Ben wants to talk about something, Russ breaks his neck and it’s hilarious

To enter the giveaway, just leave a review on iTunes or Google Play and send us the link on our Facebook page.