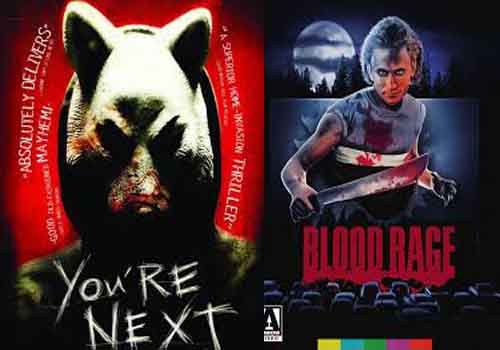 Russ did his homework and has potential proposals for Justin, Russ segues hard into the wrong movie and puts it in his pocket, Justin loves the Winter Olympics and Curling in particular, spending a week watching cricket on YouTube, Russ doesn’t like Shaun of the Dead and he could not be more wrong, checking in on how the House movies are doing, Rosebud is a McGuffin not a red herring Justin, Valentine’s Thanksgiving movie(s), Russ is right now criticizing me and I don’t like it, the realest dialogue in movie history, the balance of Larry Cohen, Barbara Crampton awkward convention story, the family broom, everything comes back to Cabin Fever 2, commercials are the new art form, MumbleGore, dramatic irony is the sub-theme for the night, prepper vs secret spy, WHAT?!, weird dirty talk, Russ read On Writing by Stephen King, Russ humor, Justin is a painfully slow reader so he just doesn’t, reading vs YouTube: which is better?, Blood Rage is a garbage movie, Ted Raimi is great, is Entourage laughing at or celebrating dude-bros?, Slasher, drive-in experiences, weird narration, weird cleavage, apparently not drinking is the weirdest thing ever, bonding with your son by laughing at strangers, more Jeff Foxworthy references because we are relevant, breathing dead bodies, smiling and shaking your head, the Cranberry Sauce Trilogy, I’m Todd!, Justin got to pick the movies and probably disappointed Russ