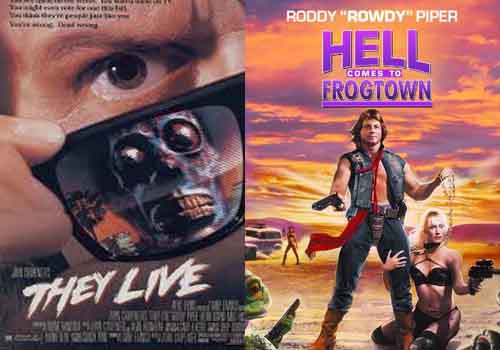 Episode 6 – They Live & Hell Comes to Frogtown
ReMake Me

We apologize for the previous sound issues (that’s ironic), Russ checks out dudes at work, Russ receives an awesome (or horrible) gift (probably insult) from his son, Hobbes checks in with a non-exclusive, Justin decides he doesn’t like John Carpenter based on trailers he doesn’t like from a movie Carpenter didn’t direct, Justin dismissed horror in the past and after Frogtown he may be again, Russ finally notices that damn tapping sound, Justin reveals his love of Keith David, the first discussion of clean trash, Justin doesn’t know geography, Hulk Hogan kills Russ, Justin is in denial of what Hell Comes to Frogtown actually is, Russ isn’t far behind, Justin almost reaches a breaking point