Episode 62 – Monster in the Closet & A Nightmare on Elm Street 2: Freddy’s Revenge 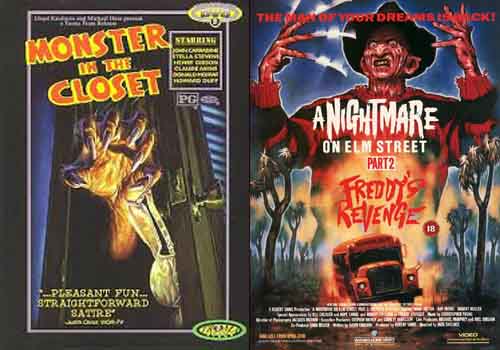 Episode 62 – Monster in the Closet & A Nightmare on Elm Street 2: Freddy’s Revenge
ReMake Me

Russ fell down and went boom, old man eyebrows are crazy, little Paul Walker, Dick Clark am I right?, is there any greater joy than spotting a boom mic in a bad movie?, cockroaches are gross, fiveshadowing, I hope you like xylophones, Power Ranger explosions, Jason Statham is great, the Punch of God, destroy all the closets, it turns out that the monster from Monster in the Closet was in the closet, I love him so much…, Russ is going to have a great story next week, I just looked at the IMDb for Monster in the Closet and friggin Fergie is in it! This episode is officially Fergalicious, Pokemon call back from last week, the gay Freddy movie, Probe, exploding parakeet, wrestlers vs. American Gladiators, Freddy transformation is pretty rad, shouting subtext into a bullhorn