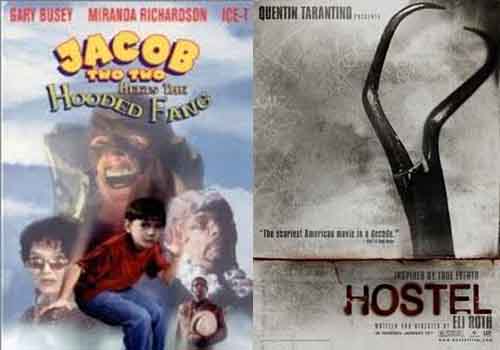 Russ doesn’t know what bubble tea is, Justin is making some progress on the bet, Justin now has six cats – this is his life now, RIP R. Lee Ermey, the obvious pairing, reading the back of the box for the third time on the podcast, Mark McKinney is in a movie with a Chicken Lady and doesn’t play the Chicken Lady, is Kids in the Hall funny?, the sad story of Dave Foley, Andy Dick is the worst, racist old Disney and Looney Tunes, two men who have never seen a diaphragm talk about what they think a diaphragm is, is wrestling real?, his name is Jacob Two Two, beady beady beady, what it’s like to work with Justin, Amazon Prime is amazing – you never need to leave the house, Gary Busey sings in this movie and it’s fantastic, Gary Busey vs. the makeup guy, Keaton vs. Bale, where’s the Fango movie?, there was also a cartoon show, give Bret Hart a break, Bunny What’s Up, metareading, Russ apparently remembers everything Justin has ever said on the podcast, discharge is the new moist, Justin fails at jokes, Hostel is bad and not really gory at all, the other f word, missing the perfect opportunity, Russ has an epiphany, two men who never have to worry about being in a threesome talk about what it would be like to be in a threesome, water vs. air, why do people like these movies?, and then, the movie is way too easy, another game