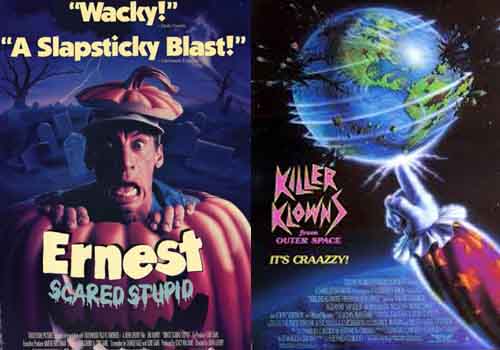 Tom Kerosec of Kerosec Productions is our guest! He tells the story of the Intro/Outro music for this very podcast, Tom messes around with kids and Russ likes to think about dead animals, Justin tells tales of his childhood, Tom keeps trying to get political, Justin declares himself the wet blanket and then proves it later in the podcast, Russ gushes about Ernest Scared Stupid, Russ thinks about dead animals again, Justin and Russ both spot the clean garbage, brown face vs. black face, Tom and Justin continue to have their own conversations while Russ tries to talk, Justin defends those scrappy underdogs Marvel and then pulls a Kerosec, Cohen Over Coen (smoothly dropped in by Russ), Miak Miak Miak, Justin is not a trained monkey, Russ makes an important distinction about Ernest as a cheerleader, Russ takes Ernest Scared Stupid to task for realism, Tom screams on the inside