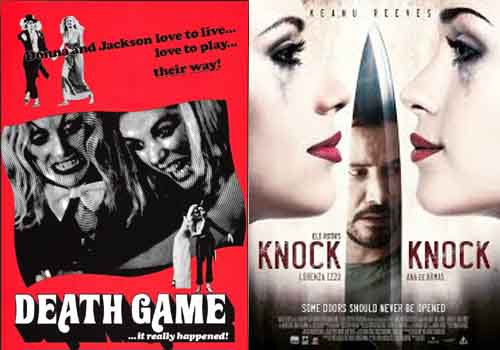 Russ avoids a near disaster on the audio-front, the aftermath of the timeout, why grandparents love grandkids, Justin is sick, Russ had to take a cold shower, dealing with a cat in heat, dudebro nightmare, Russ’s wife brings a surprise treat for Justin, debating sports metaphors, Go Sharks!, the best statutory laws, best ketchup shot ever, Justin ruins magic for Russ and the listeners, Russ drops a timely Uri Gellar reference, how long does it take for all the sand in a hourglass to fall?, pointlessness vs. not having a point, Russ watched the Spanish remake of Death Game, Russ has to feel pretty, Keanu Reeves is not a normal human being and that works for him in most roles, who is coming to the super secret party?, we give exactly one compliment to Knock Knock, baking an Uber, laundry adventures, how not to have an affair, go watch Lolita instead of Knock Knock

Next week: Dagon & The Lair of the White Worm