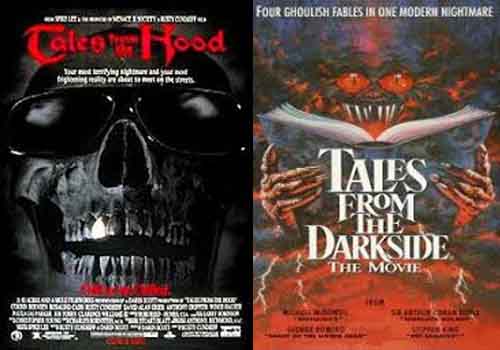 Russ’s brother is a car whisperer, Justin tells the story of the man who got licked by a dog and got De-Voltroned, Komodo Dragons be scary yo, hyenas on a leash are crazy but komodo dragons on a leash would take away from the craziness, the sky has opened up, a water-related car whisperer story from Russ, Justin’s car was an ice sarcophagus, update on the Canadian cop show game, real life Nightcrawlers (not teleporting German demons boo), Parking Wars was great-bad, grab your phone and download holedown because it’s amazing, there is no way that Tales from the Hood can be good but it totally is, Russ doesn’t do his Robert Smith impression, the best refried beans conversation ever recorded to film, there is white heroin and brown heroin everyone knows that, Russ doesn’t know what a Tazmanian Tiger is, zombie wizard weirdness, why aren’t you watching Tales from the Hood right now?, the GWB photo bomb, Russ tries to name as many 2000 Cubs as he can, Dexter read Pet Semetary, Tales from the Darkside is kinda eh, Hot Hot Hot, Dominic West!, just watch the last segement on YouTube because it’s the best part, the padlock homage