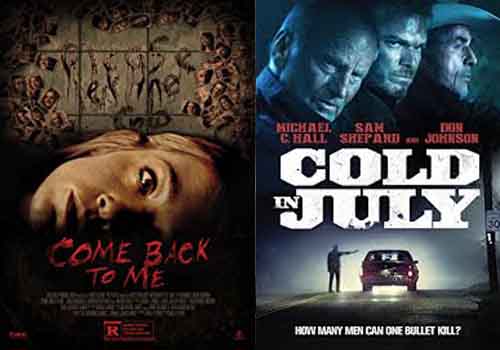 Justin went to the dentist for a crown and left without a tooth, Russ ponders when suicide is a viable option, Russ forgets how his phone works and then reads a paragraph with zero context, Come Back to Me is a terrible movie with a fantastic premise, apparently the book was better – go figure, Justin complains about the bad writing and directing and editing and movie, trying to recall the cookie drinking name, Russ has never seen RoboCop and that’s a crying shame, and then the boss battle, Russ regrets making Justin read Cows instead of a Wrath James White book, even the cover of the DVD is terrible, why does Justin have a red beard?, Justin’s not the audio guy, over-protective?, Cold in July is a well-made movie with great acting – go watch it, it would suck to clean up after a murder, don’t tell Justin’s girlfriend he admitted that he always has to be right even when he sometimes isn’t, the call is coming from inside the house, what happened to the cops?, bad KoRn soundtrack, why Russ is wrong about the 80s, the reference that isn’t, Death at a Funeral was a great movie

Next week: Behind the Mask: The Rise of Leslie Vernon & Tucker and Dale vs. Evil