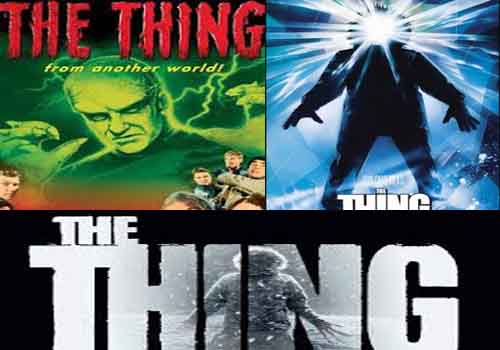 Justin got back into Magic the Gathering, Disney keeps remaking their animated films into live action films, Justin drops his first bit of comic trivia of the episode with a nugget about Ant-Man, IMCDB is apparently a thing, data nerds are the backbone of the internet, Russ doesn’t have baseboard heat, alas and alack, it’s just a giant carrot, importing DVDs from Korea, one of the poles, waking up for coffee, the subtle sexiness of 50s-era women, literal peacocking, another Gallagher story, the most dangerous scene in movie history (but probably not really), Buster Keaton and Charlie Chaplin were the true stuntmen, Russ’s latest adventures in parenthood, The Thing is a perfect movie and a prequel that fetishizes the original was completely unnecessary, the alien running around looks terrible, Tormund Giantsbane!, Justin was never going to like the prequel but it’s still not good, the one clever thing in the 2011 movie, how to make a perfect movie more perfect, Justin’s The Thing head-canon, movie de-aging technology brings in so many possibilities, Chris Evans probably didn’t take steroids, we met Wilford Brimley while he was on a hover round, Justin drops some more comic trivia on Russ this time about the Joker

Next week: Tales from the Hood 2 & Mother!