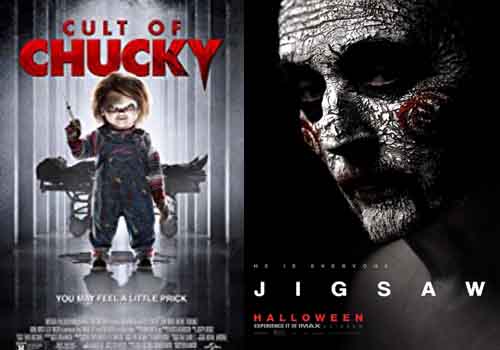 An episode a year in the making!, the ups and downs of the theater experience, rock intricate atg the MtG Community, the 2019 #MeToo pool, it was Body Count which was Ice-T’s group, welcome to 2018, paying royalties to Ronald McDonald, “His name is Paddington!”, another Russ therapy moment, Cult of Chucky is a Chucky movie but not a good one, this movie is full of cognitive dissonance, apparently shocking a person’s brain is still a thing doctors do, the giant building that is filled with 3 employees inside and one outside, the Fruit Stripe Gum/Toys ‘R’ Us connection, Russ is exactly wrong twice, the secret them of the episode is women who smother their babies with pillows, the world’s worst psychiatrist, do Asian women get type cast as stuck up? 20/20 investigates, lame kill lines, the cleverest/most disappointing part of the film, the terrible “ending” to the movie, go watch The Haunting of Hill House, how Justin experiences emotions, breakfast, Jigsaw is a Saw movie but not a good one, uninspiring traps that are both too simple and too intricate at the same time